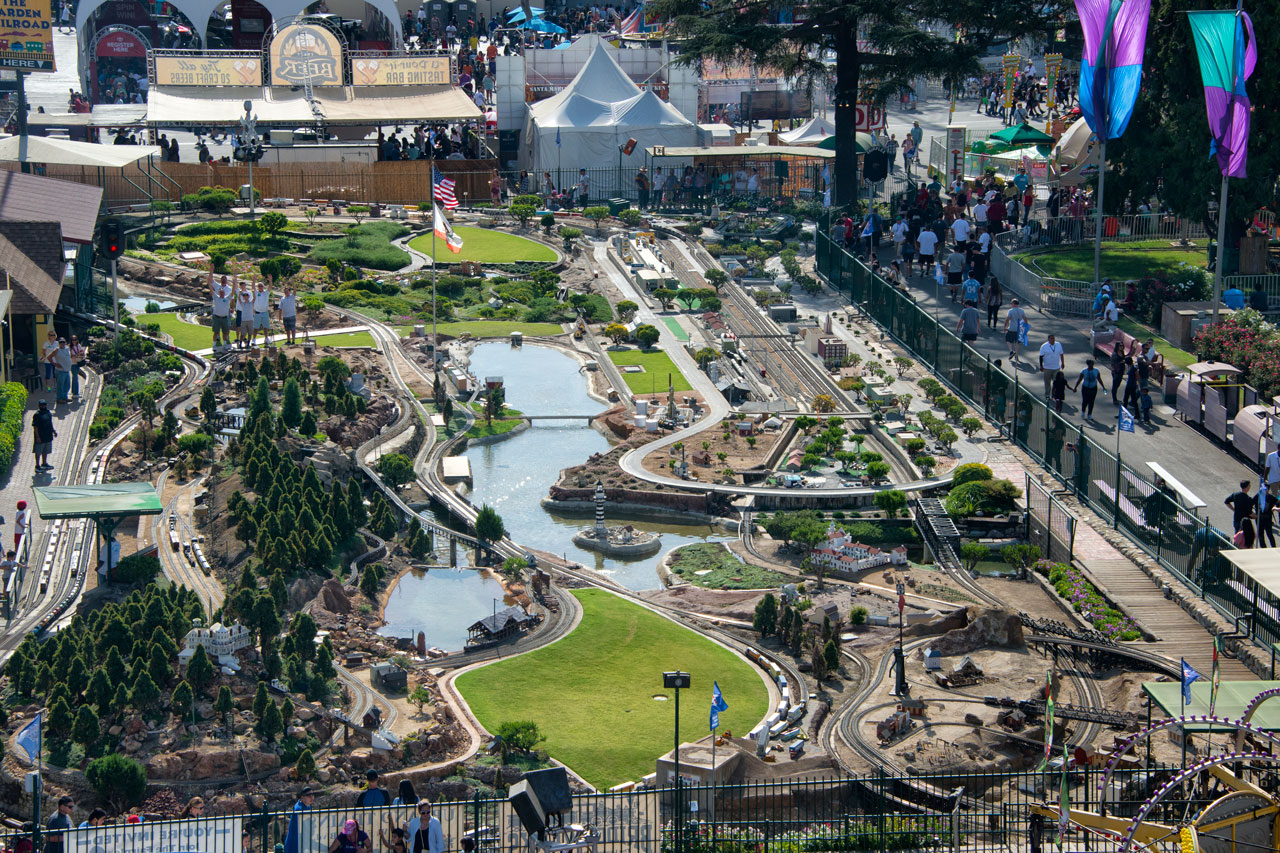 First established in 1924 and moved to its present location in 1935, it was a unique example of craftsmanship utilizing hand-made replicas of real railroad operating equipment; much of which were built by local high school students. Examples of this equipment are on display in the present shop building located in the rear center of the Garden Railroad.

Today, there is over 10,000 feet of operating track, double the amount in 1996, and over thirty sections with various operating equipment can be seen operating at any time, especially during the annual Los Angeles County Fair each September. The various trains and trolleys operate past several scenes depicting California
history from the 1850s to present day, and wander through the mountains, over the lakes and streams, and through the gardens.

The Fairplex Garden Railroad has been featured on Public Broadcasting System (PBS) television and in the hobby magazine Garden Railways, as well as many international publications in England and Europe.

History of the Railroad

The miniature railroad began as a simple diorama at the 1924 Los Angeles County Fair and was intended to provide public awareness and interest in the development of the Puddingstone Reservoir and Recreation Area. The Pacific Electric Railway was also interested in the public’s reaction and the potential of a passenger trolley schedule from Los Angeles to the Pomona area on weekends.

Herman Howard, assisted by his brother Homer, was responsible for the concept and initial development of the miniature operating railroad. Herman was a shop teacher at Pomona High School and purchased the materials at his own expense. Students were assigned class projects and constructed authentic models of engines and train cars in 1/2 inch scale from plans provided by railroad companies.

The railroad has operated for each of the Los Angeles County Fairs since, with the exception of 1942-1947; the years of World War II.

In 1958, following the death of his brother Homer, Mr. Howard sold the miniature railroad to Mr. and Mrs. Herman Templin who operated it for the next eleven years until the tragic and untimely death of Mr. Templin on August 29, 1968. Mr. John Huie, who was working with the Templin family, took over the railroad beginning with that year’s fair.

In 1970, the Los Angeles County Fair took title to the railroad and contracted with Mr. Huie to rebuild the thirty-five year old railroad. Mr. Huie continued to manage the miniature railroad for the next 26 years under contract with the Los Angeles County Fair Association/Fairplex. Following the 1996 Los Angeles County Fair, Fairplex management sought suggestions on how the aging railroad could continue as a viable exhibit for future fairs. The Southern California Garden Railroad Society submitted a proposal and were contracted to change out the existing 1/2 inch track to modern G-gauge track and provide a new look for the 1997 Fair. The miniature railroad was renamed the Fairplex Garden Railroad.

The following year, 1998, with the railroad under the Fairplex Exhibit Department’s supervision, a business plan was developed utilizing volunteers to further develop, maintain, and operate the Garden Railroad as an educational exhibit with the theme California Discovered; The Role the Railroads Played.

Beginning with the close of the 1996 Fair, the Fairplex Garden Railroad has continued to be developed by a group of men, women, and young adults that you see working on the exhibit today. Each year, major improvements have been made requiring thousands of volunteer hours. These same volunteers maintain the Garden Railroad year round and operate the trains for several shows every year in addition to the annual Los Angeles County Fair, held each September.

Manufacturers of G-scale model railroad equipment have and continue to give their support to the Fairplex Garden Railroad, especially U.S.A. Trains of Malden, Massachusetts and Bachmann Trains of Philadelphia, Pennsylvania.

Additionally, many local merchants provide annual support; you will see their names on our miniature billboards, on special rolling stock, on some of the buildings, and on displayed banners. Volunteer participation is open to adults 18 years and older and to young adults 14 to 18, when the parent, grandparent, or legal guardian is a regular and active volunteer member and present with the young adult.